Reimagining the Future of Work in Financial Services

The Future of Work  Institutional Investor’s Allocator Intel hosted “The Future of Work: An Allocator Roundtable,” based on an exclusive survey answered by more than 170 allocators. After a year in which Covid-19 has altered working environments globally, the investor- and consultant…

Creating an innovative lifetime income plan for her company’s retirees

Robin Diamonte, the CIO of Raytheon Technologies, is a woman on a mission, maybe even a couple of missions. Many pension fund CIOs are exclusively focused on beating their benchmark and leave worrying about retirees to the HR department. But the high energy Diamonte has not only compiled a top-decile investment record, she has been deeply involved in creating an innovative lifetime income plan for her company’s retirees. And she has become a vocal advocate for creating better retirement income systems across the nation.

Since her employer, United Technologies Corporation (UTC), completed its merger with Raytheon – the deal officially closed in April 2020 and the joint company became Raytheon Technologies – Diamonte has been juggling a greatly enlarged pension job with a vocal role in the national pension debate, a role that has included testifying before Congress in 2019 and serving on the Pension Benefit Guaranty Corporation’s Advisory Committee. 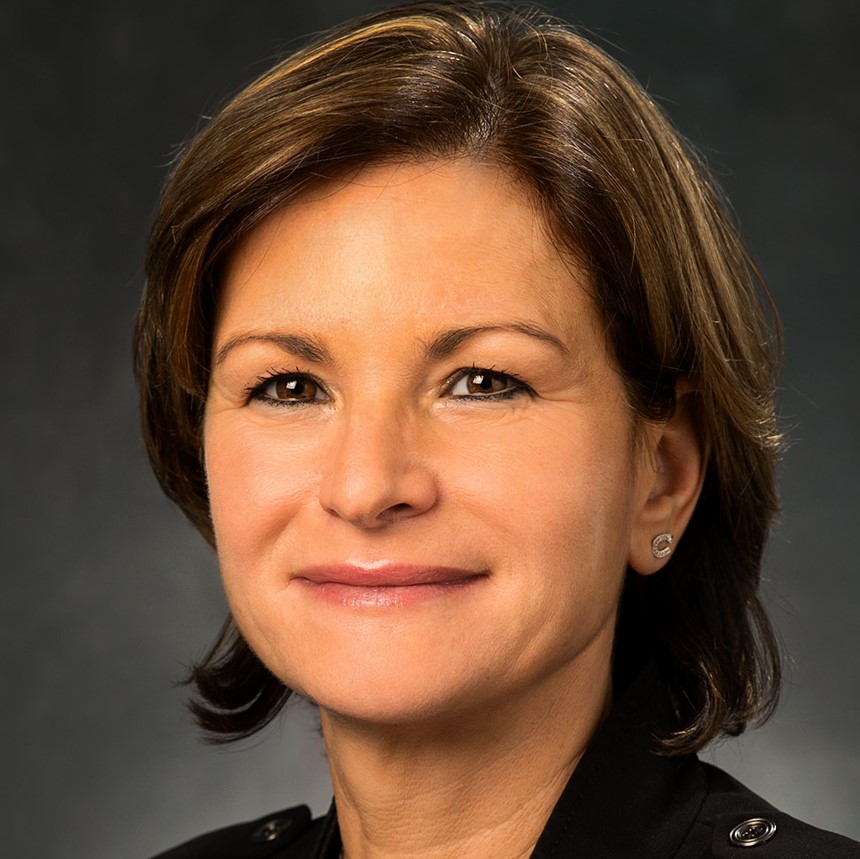 UTC was arguably one of the first true conglomerates. Its collection of companies includes Pratt & Whitney, which makes aircraft engines; Sikorsky helicopters; Goodrich – the aircraft components company, not the tire manufacturer; and Rockwell Collins, another aerospace company. It recently spun off Otis Elevators and Carrier, known for its air conditioners. The merger with Raytheon is just the latest of many amalgamations.

But now, Diamonte says, “I’m overseeing the UTC plan, which is $31 billion in assets, and the Raytheon Plan, which is $20.5 billion.” Both defined benefit plans are closed to new entrants, but the UTC plan is hard frozen while the participants in the Raytheon plan are still accruing benefits. In addition, she manages $6 billion in UK and Canadian DB plans as well as $300 million in retiree health plan assets, plus another $40 billion in DC plans. Altogether, she sits atop one of the largest corporate pension plans in the U.S.

While UTC and Raytheon have officially come together, Diamonte says, “It’s not feasible to merge the pension plans immediately because they have completely different funding status. The UTC plan is close to fully funded, while Raytheon is 70% funded.” The Raytheon plan is on track to be fully funded in five to 10 years, she says, but “in addition, the plans have different liability profiles and require different strategic asset allocations and hedge ratios.”

The plan is to create a master trust with optimally structured asset classes in which each of the two funds would hold units. Diamonte’s office would then function like “an OCIO with two customers who are going to have different goals and different liability profiles, but are within the same investment structure to maximize operating efficiencies,” she says.

The asset allocation for the UTC pension plan may offer a clue as to what the combined plan might look like: It’s 56% in fixed income and 44% in “growth” assets, a category that includes global public and private equity, real estate, multi-asset class portfolios, and hedge funds. And it’s guided by a liability-driven investment philosophy designed to minimize the pension funds’ impact on the company’s balance sheet and income statements. Meanwhile, the Raytheon plan is 30% fixed income and 70% growth assets, but Diamonte says she quickly began tinkering with that plan, and “it’ll be focused on being more liability-driven.”

Diamonte came early to the LDI party, just as she has been an early adopter for a range of innovative investment ideas. UTC was one of the first plans to use market neutral hedge funds to port alpha over to long only equity portfolios, for example. And she has sought to increase returns while managing interest rate risks by also porting that alpha over long bond futures. She humbly admits that the idea of investing in a higher-yielding securities lending program right before the financial crisis was a bust. But Diamonte’s attitude seems to be “when new investing products come out, you feel obliged to complete your due diligence and test the waters with small pilot programs.” Asked to weigh in on some of the current investment flavors of the month, she says:

Private markets: “I think that private markets will outperform public markets over the long-term, and it should because of illiquidity premium, and the ability to be more nimble.” She intends to step up the PE allocation from the current overall 5% to a couple of percentage points higher.

Internal vs. outside managers: “100% external and always will be while I’m in charge.” And while she’s at it, no middlemen: “I think one of the best things that we did was go to direct hedge fund investing and direct real estate investing instead of going with fund of funds managers.”

Risk parity: “It’s just a different framework for building a balanced risk adjusted portfolio. I’m not as excited as I was 10 years ago, I think there’s more you can do to optimize alpha than beta, but it still has a place in our plan.

Smart beta: “We did a little bit of that; we still have one portfolio because it’s done well. It was just a new name for an old strategy: factor-based investing.”

Factor-based investing: This is essentially the same technique that quant strategies have used forever. When I came into the business, we had Barra factors. Now there are different factors, and now the plan sponsor has to figure out the factors rather than the managers.

While deeply immersed in analyses of investment strategies, however, Diamonte has always seen her role as more than just beating the benchmark. “When I came to UTC, I made it my mission to really understand how the pension fund affected the company.” she says. Based on her analysis of the pension plan’s impact on UTC’s P&L, she says, “I think adopting LDI and de-risking was the best decision that I made.” She credits the partnership she had built with the CFO and CEO for getting this done effectively.

She not only has firm views about plan sponsor needs, but also the needs of plan participants. A DB plan is “the best retirement plan that you could have,” she says, but because of increasing longevity, it’s become too expensive, and because of accounting standards, “companies couldn’t handle the volatility, so you knew they were going away.” Defined contribution plans shift risk to employees, and “we know people don’t think about their retirement until it’s too late,” she says, adding, “The head of HR and I were talking about what to do.” Their conclusion: “Make the DC plan like a DB plan.” So Diamonte says, “We went back and researched a lot of different strategies, and because senior management and HR were on board, and we had phenomenal ERISA lawyers, we were able to come up with a lifetime income plan.”

The UTC Lifetime Income Strategy works like an individualized target date fund until the employee turns 48, and then it begins buying insurance that will make help pay a designated retirement income if the account balance is not adequate. While there’s an assured lifetime income, in contrast to annuities, the retirees can get access to the cash in their account. “Suppose you say ‘I don’t want this insurance anymore. I want to take all the money and give it my grandchildren because I have six months to live.’ You have access; it’s completely irrevocable,” Diamonte explains. The plan eliminates the loss of control that has made many employees wary of annuities.

Diamonte was born and raised in New Haven. The first member of her blue collar family to go to college, she went to the University of New Haven while working part-time and graduated in 1986. Her undergraduate degree was in electrical engineering, and she had gotten an engineering job working with nuclear submarines and then microwave radio engineering, but “I was bored out of my mind,” she recalls. So, she taught herself computers and got hired by GTE (a phone company later subsumed by Verizon) in 1991, to be the computer support person for its pension investment operation. While she was helping portfolio managers program alpha factors, she decided “investing is a lot cooler than computers and engineering,” so she convinced her boss at the time, Britt Harris, who would become the CEO and CIO of the University of Texas/Texas A&M Investment Company), to give her a job in the investment group. She went on to earn an MBA in finance while working for Verizon, “and then I got a call from a head hunter in 2004 saying, ‘We’re looking for a CIO.’”

Diamonte lives in Middletown, Connecticut, not far from UTC offices in Farmington, and she expects to stay there although the new corporate headquarters will be at Raytheon’s digs in Waltham, Massachusetts. She and her ex-wife, share custody of their two teenaged daughters.

Not surprising, in her free time, she’s decidedly active. “I love to run” she says. She took up horseback riding six years ago: “It was on my bucket list.” And she’s thinking about parasailing. She’s also a keen traveler. During a recent trip to Africa she went on a photo safari and visited animal sanctuaries (“I love animals.”) She also likes music – rock and roll and hip hop: “I think that’s because of my teenage daughters.”

On those seemingly rare occasions when she’s sitting still, Diamonte admits, “Everybody says they love to read, and I have a number of books half started, but I mostly end up reading investment research all the time.” In particular, she says, “If I had to say who I read the most, I’d say Ray Dalio. I read his blog. I follow him on Instagram. I read his books.” Not surprisingly, the UTC pension fund has been a Bridgewater client.

She spends lots of time just pondering the right structure for a retirement system. In a post-DB world, she says “employees have to pay attention to how their DC money is invested and resist temptations to draw it down.” But meanwhile, companies have to do a better job of educating employees about retirement. “I don’t understand why financial literary training isn’t part of what every employer provides,” she says. She also bemoans the lack of financial literacy education in schools and has taken to teaching fifth graders “about savings accounts and compound interest.”

As the massive aging baby boomer generation moves into retirement, in order to avoid a social crisis, Diamonte says the nation’s plan sponsors need to do something better than hand retirees a check with the proceeds of their 401k) account. As she told the House Ways and Means Committee in her testimony in 2019, UTC’s lifetime income approach offers lessons for employers. There may be other routes, as well, but in order to facilitate new approaches, she urged the Congress to “create a pathway toward plan sponsor and fiduciary innovation.”

Robin Diamonte is a member of II Network. To discuss the content of this article and further engage with him, comment below or Sign up today.